The much-awaited EURO 2020 was held a year later than originally planned due to the corona pandemic in eleven cities all around Europe. Amsterdam, the Dutch capital, was one of the cities to hold four games at their very own Johan Cruijff ArenA. The Dutch squad won all their group stage matches, respectively against Ukraine, Austria and North Macedonia. In the round of 16, Amsterdam witnessed a 4-0 victory from the Danish side against Wales. Another exciting chapter in the long history of football in Amsterdam. 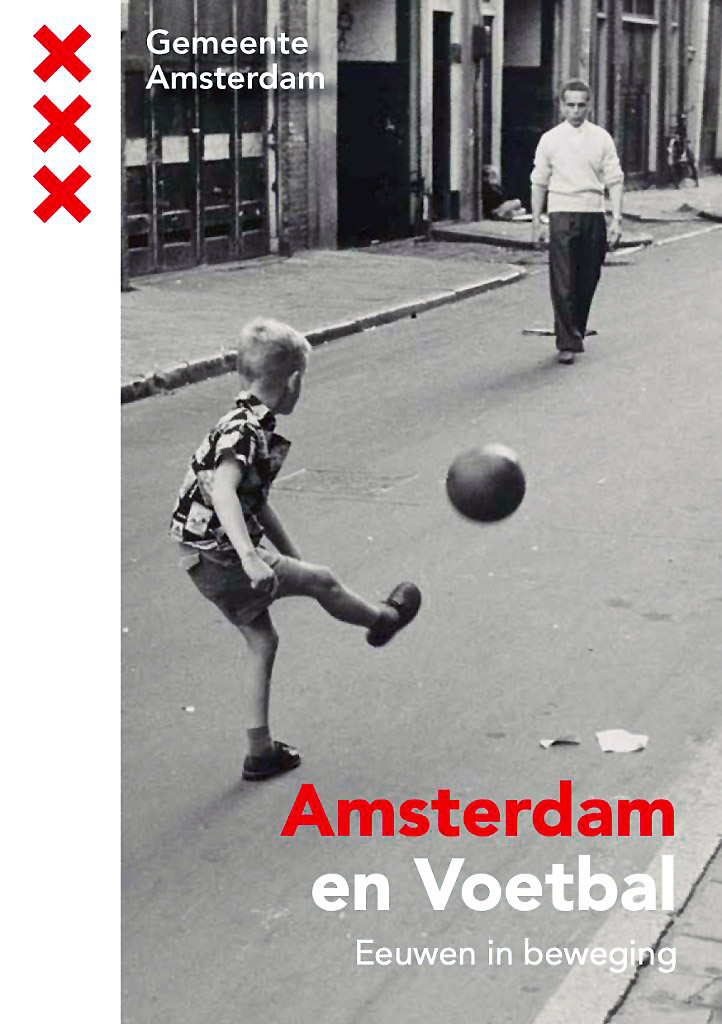 For Dutch sport historian Jurryt van de Vooren, the only Amsterdammer to ever graduate on the topic Feyenoord – mind the classic rivalry between Ajax from Amsterdam and Feyenoord from Rotterdam- the EURO 2020 was a reason to highlight some pieces of the history of this city in his book Voetbal in Amsterdam, eeuwen in beweging (football in Amsterdam, centuries in movement,) in cooperation with the city archive and published by the City of Amsterdam. Jurryt, a prolific writer, had already written about sports such as rowing and basketball and their relationship to the city of Amsterdam.

In Voetbal in Amsterdam, Jurryt presents 21 short stories in chronological order leading up to 2020. The first story is from 1898, about the first national champion, a team by the name of RAP, that ceased to exist long ago. Jurryt: “I wanted to show the special relationship Amsterdam has with football. Logically I wanted to focus on all the many aspects of football, but I also didn’t want to give the obvious stories.” This was very successful. The book touches upon all the major aspects of football in Amsterdam  today (professional football from Ajax to the Volewijckers, women’s football, etc.) but using less known and very interesting examples.

An example of such a history is that the first time a womens’ match was mentioned in the media was on 25 July 1920, although there was a womens’ football association already before WWI, and also an Amsterdam based women’s team called Wittenburg, founded in September 1919. This anecdote illustrates the pioneering days of womens’ football, and football’s attitude in general to it. The book also tells the story of a game between OSV from Oostzaan, where women from a local korfball club were supposed to play against Wittenburg. The latter didn’t show up. On sight another team was picked. The team photo taken there is the oldest of a women’s football team in the Netherlands. For this story, Jurryt gives credit to Tessel Middag, international now playing for Rangers WFC, but also a historian who wrote her thesis on women football.

A perfect example of how football can be used as a window to recent historical events is the first and only title won by De Volewijckers. During the Second World War in 1944 this football club from the North of Amsterdam played their championship games to the other four regional champions at the Olympic Stadium, because their own pitch was marked unsafe due to the risk of bombardments. Even in wartime thousands of tickets were sold. Fans, according to Jurryt, even sold their basic goods to get a ticket and young men in hiding from forced labour went to see the games, especially the last match against Heerenveen. Jurryt quotes Tip de Bruin:

At the entrance of the stadium there were uniformed Nazi Orpos and members of the Dutch National Socialist Party. I walked into the stadium in the middle of the mass of supporters to go unnoticed.

Modern histories are also recounted in the book, now that football is intertwined with every aspect of life. What started in Amsterdam as an elite sport is now accessible for everyone, as Jurryts description of the Friendship Sports Centre shows. Dennis Gebbink started a sports club named Only Friends in 2000 for children with a handicap, which resulted in 2010 in the highly advanced Friendship Sports Centre with the local government and the Ajax Foundation involved.

As a reader, the risk is that you’ll see this publication as a canon of football in Amsterdam. As mentioned earlier, this wasn’t Jurryt’s intention at all. Otherwise, unforgettable events like Ajax winning the Champions League in 1995 would’ve been described. Still, there are some points open for critique. I personally missed one viewpoint, namely that of migration or of people from former colonies. If I could add a date it would be 1 July 1960 when Real Sranang was founded by a group of Surinamese people, mostly regular patrons of the famous Amsterdam jazz cafe Cotton Club at the Nieuwmarkt. Many of them played football together under the name Cotton Boys at that same square, including big names such as Armand Bruma, the first chairman, and Albrecht Soerel, second husband of Alie, daughter of the owners of the illustrious cafe. Or I would add the date of the first edition of the WK Amsterdam (later WK Nederland) in 2001. A tournament held until 2020, where Dutch people played for the country they or their ancestors came from. In the end up to 48 teams (of which 10 women) participated with up to 30.000 spectators in total.

From Amsterdam to the classroom

This book can be very useful for teachers in the classrooms given its structure is very clear – with football related historical events pinned to specific dates. Readers will always find some of the stories interesting and will think of stories that are missing. After reading this book, students could add dates and events or make their own timeline of football events in their own cities or towns. I personally grew up in Amersfoort, where AFC Quick 1890 and HVC (later SC Amersfoort) played at the highest tiers of Dutch football, or where John van den Brom started his career at APWC. Amersfoort is a railway hub and has had many bases for garrisons, one of them used in the Second World by Germany as an internment and imprisonment camp. I can only imagine the stories of students who will want to dig deeper and find their own interesting local stories as well.

Black and white in the orange

On This Day, Stories

On this day at the Euro2020, an inclusive Dutch team would have played in Amsterdam. Something of a contrast with the Dutch team who lost to France 24 years ago on this date during the Euro1996. An opportunity to use football as a lens into changes in Dutch society, the role of footballers and a look ahead.

Over 100 life stories have been collected. Together they present a story of the people of Europe in the last 150 years. Time to connect the dots.

Love’s the only engine of survival: the story of La Raulito’s passion for Boca Juniors

A class of high school history students in Oslo was asked to create an ideal starting XI line-up based on Human Rights. Find out why and how it went.

Pass, Shoot, Goal! Football in the Jazz Age – a review

A loving fan and musician put together his two passions and created this compilation of tunes from the Jazz Age.

Get to know these colour videos of Jewish footballers in 1936 and 1944. Incredible primary sources of football in tragic times.